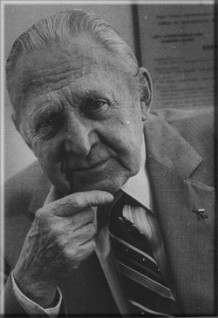 Feliks Konarski (pseudonym: Ref-Ren)  was a Polish poet, songwriter, and cabaret performer. Konarski was born on January 9, 1907 – August 9, 1991 in Kiev and attended a Polish school there. In 1921, he was able to get to Poland by foot.
He passed his matura (final exams) in Warsaw. He began to study Polish at Warsaw University, but found his calling on stage.
A deciding point was encountering Konrad Tom, who helped Konarski begin authoring poems and songs, as well as suggesting the "Ref-Ren" stage pseudonym. In addition to songs, Konarski also wrote satirical plays for theater groups.
In 1931, he married the actress Nina Olenska. In 1934, Konarski moved to Lviv (Polish: Lwów) where he established a theatre group. He wrote many poems as well as words to what became numerous popular songs.
After Lwów was taken over by the Red Army, Konarski performed as part of a traveling orchestra in numerous cities in the Soviet Union. When Nazi Germany attacked, he was in Moscow. In 1941, he enlisted with the Polish Armed Forces in the East.
He was evacuated to Iran where he headed the Polish Soldier's Theater. He was with the Polish Second Corps until it was transported to Britain and demobilized. In the autumn of 1946, he went to London where he organized and conducted the Ref-Ren Theater. Together with his wife and other exiled Polish actors, the theater traveled around the world providing humor and sentimental songs to war scattered Poles. In the 1950s, and 1960s, he recorded several dozen of these broadcasts for Radio Free Europe, the Polish section of Radio Paris, and the Polish section of the BBC in London.
In 1965, Konarski settled permanently in Chicago. He organized Polish cultural activities and had a radio show called Czerwone maki (Red Poppies) for over twenty years that was also broadcast in New York City. He also continued to sing and perform on many stages in England, France, and the U.S.
Although he is best known for writing the "Red Poppies on Monte Cassino" song, Konarski was also an author and composer of hundreds of other poems, songs, monologues, skits, musical comedies (including "December" in 1981), as well as special programs to commemorate Polish veterans and national holidays.
He added a fourth verse to his Czerwone maki na Monte Cassino song in 1969, on the twenty-fifth anniversary of the battle.
It is less known than the original version.
His dream was to see an independent Poland. Konarski witnessed when Poland returned to a free nation after undergoing political and structural reforms. He was to visit his homeland, but died in Chicago on September 12, 1991, the day before he was to arrive in Poland.
Konarski was always a Pole and patriot, who preached Poland's unbending right to freedom and self determination. For his attitude for the nation's independence and for cultivating Polish culture in exile, he was twice awarded the Order of Polonia Restituta (Knight's Cross and Commander's Cross), first by the President of Poland in exile, and then posthumously. 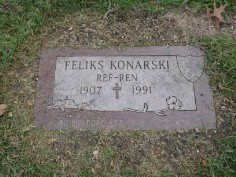 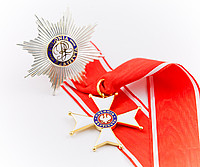 "The Red Poppies on Monte Cassino"
Feliks Konarski served with General Władysław Anders' Polish Second Corps in Italy. There, on the eve of the Poles' victorious storming of Monte Cassino, he wrote the unforgettable and moving anthem, Czerwone maki na Monte Cassino text and music (The Red Poppies on Monte Cassino). This song, set to music by Alfred Schuetz on that night, became Konarski's most famous composition, served to maintain his compatriots' spirits in one of Poland's darkest hours, and after the war was banned in Poland under communist rule. The song became an unofficial anthem and many people stood at attention when it was played.

D`you see those ruins on the hill-top?
There your foe hides like a rat!
You must, you must, you must
Grab his neck and cast him from the clouds!
And they went, heedless of danger
And they went, to kill and avenge
And they went stubborn as ever,
As always - for honour - to fight.
Refrain: Red poppies on Monte Cassino
Instead of dew, drank Polish blood.
As the soldier crushed them in falling,
For the anger was more potent than death.
Years will pass and ages will roll,
But traces of bygone days will stay,
And the poppies on Monte Cassino
Will be redder having quaffed Polish blood.

They charged through fire like madmen,
Countless were hit and fell,
Like the cavalry at Samosierra,
Like the men at Rokitno years ago.
They attacked with fury and fire,
And they got there. They climbed to the top,
And their white and scarlet standard
They placed on the ruins `midst clouds.
Refrain: Red poppies on Monte Cassino ....

D`you see this row of white crosses?
Polish soldiers did honour there wed.
The further you go, the higher,
The more of such crosses youl'l meet.
This soil was won for Poland,
Though Poland is far away,
For Freedom is measured in crosses
When history from justice does stray.
Refrain: Red Poppies on Monte Cassino...

Based on Lech A.  Hałko